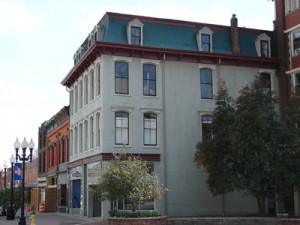 In the year 1898, under the leadership of Mr. O.J. Owen, a small group of Christians assembled for Sunday School and Prayer meetings in an upstairs room over McKethan Drug Store located on the corner of Person and Gillespie Street across from the Market House in downtown Fayetteville. They probably continued to worship at that location for about five years, since we have no record of another meeting place until 1903. When the McKethan family (owners of the Drug Store where they had begun gathering) sold this property, church members purchased property on the corner of Person and Broad Streets.

The newly acquired property contained a building, probably an old store which had been used for the Campbellton Sunday School. This building became the very first Pentecostal Holiness Church in Fayetteville. Trustees of the church property were: O.J. Owen, R.B. Humphreys and Murdock Maxwell. Charter members of the church were: Mr. and Mrs. Ed Britt, Mr. and Mrs. Murdock Maxwell and Mrs. Mary Jones.

In 1919, the old church (the former Campbellton Sunday School Building) was torn down and a new wooden building was erected. Years later the Broad Street Assembly Room was built and used for worship services while a new brick building was under construction. That building was completed in 1952.

In 1956, an attractive parsonage convenient to the church grounds was built on Parkview Avenue. Two parsonages located on the church property had preceded this one, the first was built in 1912 and the second in 1941. On Sunday, November 3, 1957 a new Education Building consisting of twenty classrooms was ready for occupancy. In 1965, a spacious, accommodating Fellowship Hall was constructed on property acquired from P.D. Jones.

In 1973, Rev. J. Floyd Williams was elected as General Superintendent of the Pentecostal Holiness Church. When he was our pastor in 1956, his wife Jean started a Junior Lifeline Program in our church. It was later adopted by the North Carolina Conference and the General Pentecostal Holiness Church. In 1979, the sanctuary was enlarged by enclosing the porch on the front of the church. Other renovations took place and new furniture was acquired and a new steeple was erected and steeple chimes were installed.

The Person Street Pentecostal Holiness Church established a rich heritage by winning most of the families of the Campbellton Community to Christ. More than fifty families who were won in the early decades of the church’s existence have descendants who are still affiliated with our membership and some became ministers and missionaries.

City officials and business people have respected and openly admired many of our members. On one occasion when one of our pastors participated in a Devotional Service at Belk-Hensdale Department Store, Mr. Hensdale was admiring several of his employees who were members of the Person Street Church. He said he would like to employ more workers who possessed and exhibited their Christian character.

Before the church was air-conditioned, the City Transit Company had a bus stop in front of the Person Street Church. It was not uncommon for buses to remain parked longer than was necessary for loading and unloading. Some drivers and passengers wanted to listen to the anointed preaching and singing coming from the open windows.

In September 1992, the church membership voted to relocate. One year later the church agreed to purchase ten acres of land located at the intersection of Baywood and Murphy Roads for the purpose of building a new place of worship.

In April 1994, the Person Street Church property was sold to the Christ Gospel Church, a congregation that desired to evangelize the Campbellton Community with the same gospel that was so precious to the former Person Street members. In May 1994, the Person Street congregation began assembling for Sunday service in the Howard Johnson Convention Center on Cedar Creek Road. Mid-week services were conducted in the homes of various members. On June 8, 1994, the congregation agreed to call the new church the Baywood Pentecostal Holiness Church. It was incorporated by the State of North Carolina on November 14, 1994.

In 1995 a contract for a new church was awarded to Cosco and Associates, Inc. and a $600,000 bond program was initiated. The groundbreaking ceremony for the new construction was held on January 1, 1995. On Sunday morning, August 27, 1995 the first service was conducted in the new sanctuary. The dedicatory service took place on October 22, 1995 with Bishop B.E. Underwood, General Superintendent of the International Pentecostal Holiness Church delivering the message and Rev. J. Doner Lee, former superintendent of the North Carolina Conference, praying the dedicatory prayer.

From 1903 to 1907, the church was served by ‘supply pastors’ who held the small congregation together despite predictions that it would not last three months. In 1907, the Rev. A.B. Crumpler, a former Methodist minister, who founded the Holiness Movement of North Carolina, became the pastor. From 1907-2020 the church had been served by 46 pastors. There was certainly no indication that a small group with such humble beginnings would endure and become such a vital, dynamic church continuing on into the 21st century – to God be the glory!